Cannabis Strain Names Are Meaningless: What Is The Industry Doing About It? 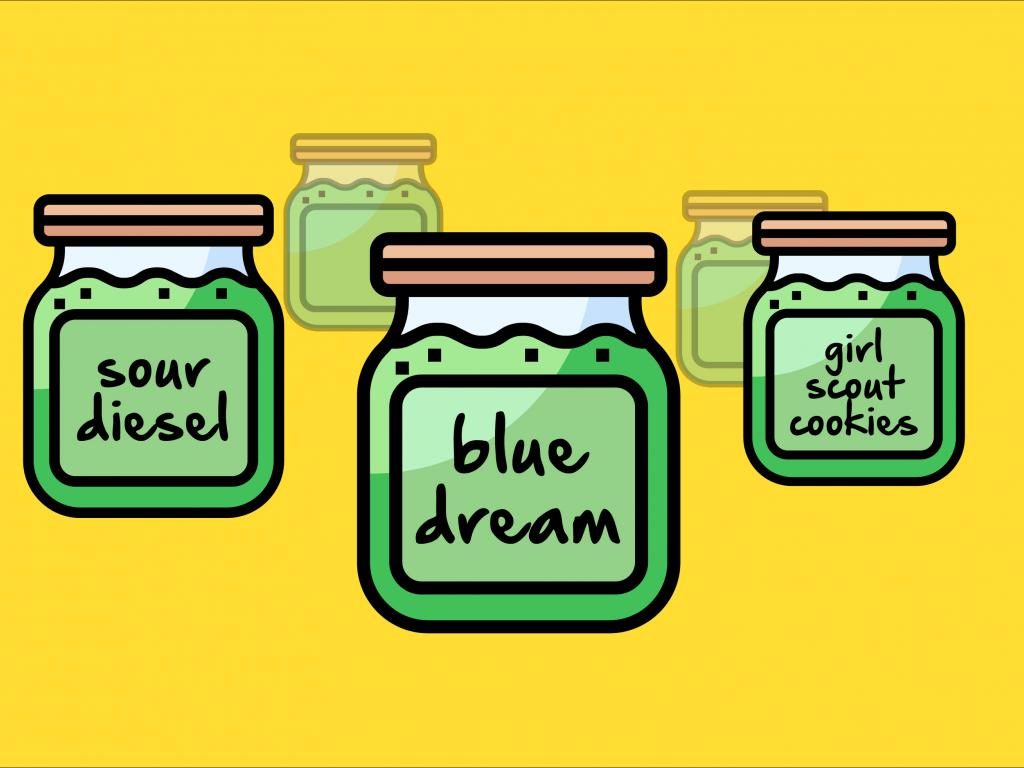 A spectre is haunting the cannabis industry: strain names.

Blue Dream, Sour Diesel, Girl Scout Cookies — these names came up as informal ways of identifying types of cannabis in the black market era, when growers and producers had little access to scientific-grade lab testing.

Today, however, strain names remain a part of consumers’ and brands’ vocabulary even though these labels carry no intrinsic value and a more mature industry has emerged.

This means that when users step into a cannabis dispensary to buy an ounce of Blue Dream, there’s nothing in the labeling that can guarantee that this Blue Dream carries the same, or similar, chemical profile as the one purchased the previous month.

Although most experts agree on this, consumers generally perceive cannabis strain names as true indicators of a product’s unique traits and chemical compositions.

While most industry professionals think something should be done about this issue, the playing field is divided between two schools of thought: those who think strain names should be overcome and left in the past, and those who believe strain names can be regulated and used in a scientific way.

What’s In A Name?

A 2013 study by Dale Gieringer, a state director of California NORML, analyzed over 1,500 cannabis samples from a variety of California growers.

Gieringer examined the cannabinoid and terpene content of flowers sold as Sour Diesel, Jack Herer, OG Kush and Trainwreck. What his team found was astonishing.

“[The samples] were compared using a statistical technique known as Principal Component Analysis, which groups different data points along two (in this case) axes that have been chosen to discriminate the most statistically salient differences in the data,” Gieringer said. “Ideally, different samples of identical strains should appear at identical points.”

However, the charts in the study show all strains smeared around, showing vast inconsistencies in their chemical content.

The study also confirmed the Indica/Sativa/Hybrid designation is not chemically meaningful. It may indicate a plant’s morphology, but not physiological effects.

Using strain names to distinguish one type of cannabis from another makes sense. Given that cannabis plants can carry very diverse chemical profiles — cannabinoid and terpene contents — consumers want to identify one from another by a name.

Consuming different plants can lead to vastly diverse consequences for the body and mind.

What most consumers don’t know is that there are no intellectual rights to most strain names. This means that any legal cannabis grower is free to market and sell their product with whatever name they choose, regardless of the plant’s origin or chemical composition.

Even if a breeder is completely positive that the seeds they’re using belong to one particular genetic family, there’s no guarantee that growing from those seeds will result in a pre-established chemical profile.

Cannabis plants are living, breathing things, says Len May, CEO of Endocanna Health, a cannabis and genetics research company. Like any plant, growth is influenced by external and environmental factors like light, watering, temperature, soil and wind.

A phenomenon called “genetic drift” can cause cannabis plants from the same batch to express different chemical profiles.

Legendary musician and cannabis entrepreneur David Crosby once discussed this issue in an interview with Benzinga.

“They mixed everything back in the beginning of the ‘70s. The guys in Hawaii were growing the best pot in the world at the time,” Crosby said. “They crossbred everything with everything, so I think most of the separations you see people talking about now are theoretical more than actual.”

Solution One: Leave Strain Names Behind

So, how is the cannabis industry dealing with this issue?

One group of industry professionals thinks that strain names are not a good way of guaranteeing chemical consistency of cannabis products and believe that new categories should be used, especially in the medical space.

One of the strongest voices in this group is long-time cannabis advocate Mara Gordon, co-founder of medical cannabis company Aunt Zelda’s Inc.

“I think the entire naming has been driven by the marketing experts and not driven by scientists,” Gordon said.

Strain names can cause a great deal of confusion for patients in need of cannabis treatment, she added. Gordon would prefer to erase the word “strain” entirely from the cannabis vocabulary, since its origin is unscientific.

She has a point: the word “strain” has no official use in botany, and is actually a term borrowed from microbiology, where it’s employed to describe genetic variants of microorganisms like viruses and bacteria. Citing the work of Dr. Ethan Russo, Gordon would prefer to use the word “cultivar” to refer to genetic variants in cannabis.

“Every time you go to the dispensary there’s 30 new names that you’ve never heard of,” she said. “And there’s no regulation on how they’re named.”

For Gordon, it’s not just the problem of someone naming their harvest “Blue Dream,” for instance, when the genetics are not close to the average Blue Dream strain. The main problem comes when someone takes a perfectly normal Blue Dream strain and gives it a new name, prompting an oversaturation of cannabis products that cause patients to become lost and confused in the market, she explained.

More important is understanding the ratios of cannabinoids and terpenes in each plant, regardless of its name. That is the best way of ensuring that a patient will experience consistent results, Gordon added.

In terms of medical science, this argument makes perfect sense. In a strictly pharmaceutical environment, the names of the drugs should not influence the outcome.

The more than 14,000 strains available on seedfinder.com can be reduced into fewer than 10 categories, grouping cannabis plants by their similarity in terms of cannabinoid and terpene profiles.

“Once you start looking at the full profile of what’s in there, you can break it down very simply into types.”

According to a recent report published by cannabis data analytics company Headset, non-specific cannabis strains are gaining market share in the western states where the company operates. California, Oregon, Washington, Nevada and Colorado, as well as the Canadian provinces of British Columbia and Alberta showed a significant sales rise in non-specific strains between early 2017 and 2020.

“How reliable or unreliable are strain names out in the market?” Leafly’s Nick Jikomes asked.

That’s the question he and his research team at Leafly set out to answer and solve.

“If we get better as an industry at self-regulation, working with growers and working with the retailers to make sure that we’re verifying the authenticity of the name and the chemical profile for these products, I think we can actually use strain names in the way that they’re intended to be used,” he added.

Leafly is part of a group of companies that believe strain names should be organized. This is no big surprise, given that a big portion of the company’s platform revolves around cataloging cannabis strains.

Leafly’s strategy is to perfect the strain names paradigm, bringing scientific rigor to a disorganized market.

The company is working on creating a certification system under which strain names can become meaningful by allowing consumers to compare the cannabinoid and terpene contents of the strains they purchase with an “average.” This average strain is generated by aggregating data from thousands of samples from that same strain.

Working with lab partners across the U.S. and Canada, the company was able to gather thousands of data samples from cannabis strains across the continent. Using this anonymous data, Leafly constructed an “average” profile for each strain name, portraying the most common chemical characteristics of every cannabis strain.

Growers who work with Leafly Certified Labs can choose to show the chemical profile of their products in the Leafly platform, and allow users to visually compare it with the regional average.

While Leafly is already working on standardizing lab testing through the Leafly Certified Labs program, the roll out of Leafly Certified Products got delayed because of the COVID-19 pandemic.

“COVID forced us to slow down on various projects, including working on Leafly Certified Products,” said Jikomes. “Among other things, the current situation prevents us from doing much of the in-store consumer research we need, as they require a physical presence in stores.”

The Problem Of Unstandardized Lab Testing

As Leafly started the process of standardizing strain names, the company ran into a question that needed answering: How reliable are the labs that are actually doing the testing?

“In my opinion, laboratories should not be for profit. They should be either run by governments, universities or nonprofits,” said Gordon, who believes that a for-profit attitude in lab testing can lead to corrupt practices.

Gordon recalls several bad experiences with testing labs throughout her career. In one occasion, a lab delivered very different results for the same plant material. After being called upon this, they announced that Gordon’s sampled extracts had residual butane, when the extraction process had been done with ethanol.

In another experience, a lab offered to alter test results in exchange for higher fees.

For these reasons, Leafly decided to take even one step further back and make an effort to standardize lab testing.

“Ideally, there would be government regulatory enforcement that allowed us to have standardization,” says Jikomes.

The problem is that, as cannabis continues to be federally illegal, there is no federal regulatory body setting standards for cannabis lab testing.

“Each state has its own separate regulatory bodies,” he said. “And there’s really no way to get standardization across them. And a lot of them don’t really understand how to enforce and regulate things like scientific studies or scientific testing of cannabis products.”

Leafly developed a Certified Labs Program, in which lab testing facilities have to pass a data assessment process in order to achieve the certification.

While this solution is far from perfect, it’s a valuable effort from an industry that is recurring to self-regulation in order to elevate the quality and consistency of its products.

Looking Inside The Strains’ Chemical Data

After making sure that all labs in its platform are working under the same parameters, Leafly started testing different samples of cannabis products, purchased in different locations across the United States and Canada. Their goal: to compare the chemical profile of each product bought under specific strain names.

According to the research, consistency varies depending on the strain.

“In the United States, about 86% of Blue Dream strain names that we find attached to flower products have a chemical composition that’s high in myrcene and pinene as opposed to being dominant and another terpene,” said Leafly’s Jikomes.

Blue Dream turned out to be one of the most consistent strain names out there with about 14% of flower products labeled as such — very far from the national average.

“Pineapple Express is much more variable and you’re much less likely to see the same chemical profile from two different growers using that strain name for their product,” he said.

Jikones tells us that, at the end of the day, what consumers need is a way to get products that have a known and reliable chemical composition. That way, they actually know what they’re getting when they make a purchase.

However important it is to achieve consistency in cannabis products. It’s also crucial to understand that these products affect individuals differently. So it’s not just the genetics of the plant, but also the consumer’s genetics that has an effect on how a particular strain will affect a particular user, says Endocanna’s May, who is collaborating with Leafly, crossing their own database on human genetics with Leafly’s data on cannabis strains.

As the industry grows larger and consumers become more educated, a need for stronger and more thorough regulation becomes evident. However, as federal prohibition presents hurdles to regulatory progress, the industry needs to find ways to self-regulate.

These best practices are being born in an industry on a quest for self-regulation. Perhaps it’s a valuable and necessary middle step that will set the stage for what will eventually lead to the development of federal — or global — oversight.