Election 2020: The pros and cons of legal cannabis to be debated 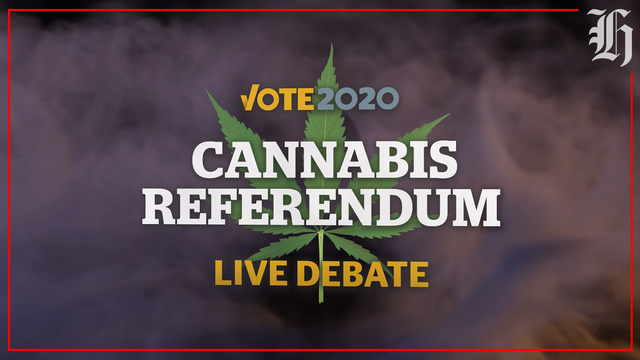 The arguments for and against legalising cannabis for personal use are at the centre of tonight’s debate about next month’s referendum.

Cahill said police will follow whatever the public decide, but he warned that without the right price or the right THC (the psychoactive ingredient) level, users would simply stick to the black market.

Ironside argued that youth use would increase under legalisation simply because “it will be everywhere”, but Bell and Cahill both cited Canada, where youth use fell – official statistics which Ironside challenged.

Bell said the proposed legal regulation in New Zealand would protect young users because millions of dollars would be available for education and treatment, and it was easier to talk to young people about legally regulated products.

Cahill said 50 per cent of cannabis in Canada was being bought on the legal market within the first year of legalisation, but most people who were vulnerable users were more likely to stay with the black market.

He said it was “nearly impossible” to get thrown in jail for use/possession of cannabis.

But Quince said Ministry of Justice statistics showed 230 people in 2019/20 were convicted for cannabis use/possession alone, and five of them were jailed.

Cahill said he didn’t believe people were jailed and it was more likely they did a short stint in jail in place of a large fine they couldn’t pay.

He said police action for cannabis use/possession had dropped signicantly, but it should be up to Parliament to decriminalise drugs if it’s what lawmakers wanted.

It shouldn’t be done by police discretion, which is applied differently in different regions and to different people.

“I couldn’t push away the anxiety and depression.”

Cahill said most cops were against legalisation because of the harm they’ve seen, especially in rural, deprived communities.

Bell said cannabis was already here, and it was about how to reduce harm. “We aren’t inventing cannabis.”

And Quince, who is from Northland, said the isse was not about using, but why people used, and more health treatment was crucial to reducing harm.

Bell said legalisation would help people wanting to use it for medicinal purposes, but unable to access cheap, legal medicinal cannabis products.

Quince added that people often used it for low level anxiety or sleeping trouble, issues that people don’t go to the doctor for.

But Ironside said that wasn’t a reason to vote ‘yes’. It was a reason to fix the current law around medicinal cannabis.

Cahill added that conflating medicinal and personal use was sending the wrong message, and people should not self-medicate.

Polls so far show that the October 17 vote will likely be a tight race.

It is about legalising cannabis for recreational use, the proposed framework for which is detailed in the Cannabis Legalisation and Control Bill.

An expert panel led by chief science adviser to the PM Dr Juliet Gerrard has published detailed information about the issue – without taking any sides.

Gerrard has said that the key issue is about whether legalisation under the proposed controls would reduce cannabis-related harm more than the status quo.

Those harms are not only health ones – which mainly affect young users or heavy users – but also social ones, such as how a cannabis conviction can see someone excluded from society or unable to find work.

The panel said New Zealand’s proposed regime was closer to Canada’s than any other region overseas where personal use was legal.

Canada legalised two years ago, and since then there’s been a moderate increase in occasional adult use, an increase in daily or almost daily use for those over 65, and no reported change in use among those aged 15-24 for occasional or frequent use.

The panel, whose work has been nationally and internationally peer-reviewed, added that legalisation overseas had not been in place long enough to show any long-term trends.

Last week two reports by Business and Economic Research Ltd (Berl) showed that legalisation could create $675 million a year through excise tax and licencing fees that could be spend on health services.

Berl’s modelling assumed that a legal market would displace about two-thirds of the black market.

To meet that demand – 49.7 tonnes of cannabis a year – Berl says New Zealand would need 134 retail stores, 59 licenced cannabis cafes, and 227 combined stores; 207 retail stores would be based in six major cities, including 125 in Auckland.

The referendum has become somewhat political, after National and Act confirmed that a majority “yes” vote wouldn’t necessarily lead to the bill being passed into law under a National-Act government.

Both parties said they would send the bill to a select committee, but its progress beyond that would depend on what the committee recommended.